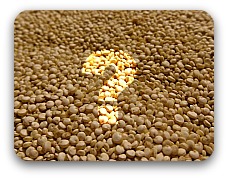 Where to begin! There is so much to know about quinoa (pronounced "KEEN-wah") See here for ways to not pronounce quinoa.

First we need to know what it is not:

It's actually a seed -- the seed of a plant in the genus Chenopodium, to be precise.

What does that mean, you ask? For those of us who don't natively speak Latin, it means "goosefoot."

How did it get the name "goosefoot?" Well, its leaves look like -- you guessed it -- the feet of a goose.

OK, that was bonus info. Now back to the matter at hand.

This non-grain "super-grain" is in no way related to wheat -- so it's gluten-free!

And it's packed with all sorts of nutrients.

You're already seeing how this food can benefit your health, aren't you? Gluten-free...lots of nutrients...tasty, too!

But we need to shift the benefits from your head to your tummy! So, let's learn how to cook this wonderful Chenopod already!

How to Cook Quinoa 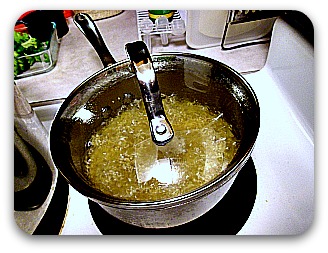 That's it! Really simple. You can do it. How much easier could it be to eat so healthy?

For more detailed instructions on cooking quinoa read how to cook quinoa.

Now you know something about quinoa.

You also know how to cook it.

But did you ever wonder about it's history?

I mean, if you're like most people you may not know anything about quinoa's rich history.

Let me tell you a little about it...

Don't worry. Despite the heading above, there's no test at the end of this section.

Grown for thousands of years by the Incas, this crop was in danger of going extinct during the Spanish conquest of South America.

The Incas considered this chisaya mama or "mother of all grains" to be sacred. So they used it in their religious ceremonies.

When the Spanish came to South America they forbade the growth of it because of its non-Christian religious associations.

But that didn't stop the natives from growing and consuming it. And aren't you glad it didn't?

Otherwise you and I, health-conscious consumers that we are, would never know what it was like to have this delicious, nutritious, gluten-free treat!

Plus, if quinoa had been wiped off the face of the earth, then 2013 surely would not have become "The International Year of the Quinoa." ... No, I'm serious! Google that term.

And speaking of Spanish, have you ever wondered how to say quinoa in different languages?

Quinoa in Other Languages

Quinoa is booming in India.

And so a number of Indians want to know how to say quinoa in Hindi, in Telugu, and in Tamil. These are three of the most popular languages in that country.

But quinoa's popularity doesn't stop with India! Both French and Spanish speakers want to know how to speak of this nutritious seed in their own tongue!

Hungry for More Info About Quinoa?

Want to know more about quinoa?

Keep reading! This is what our site is all about.

As you explore, you'll discover...

What do you think? Leave me a comment in the box below.